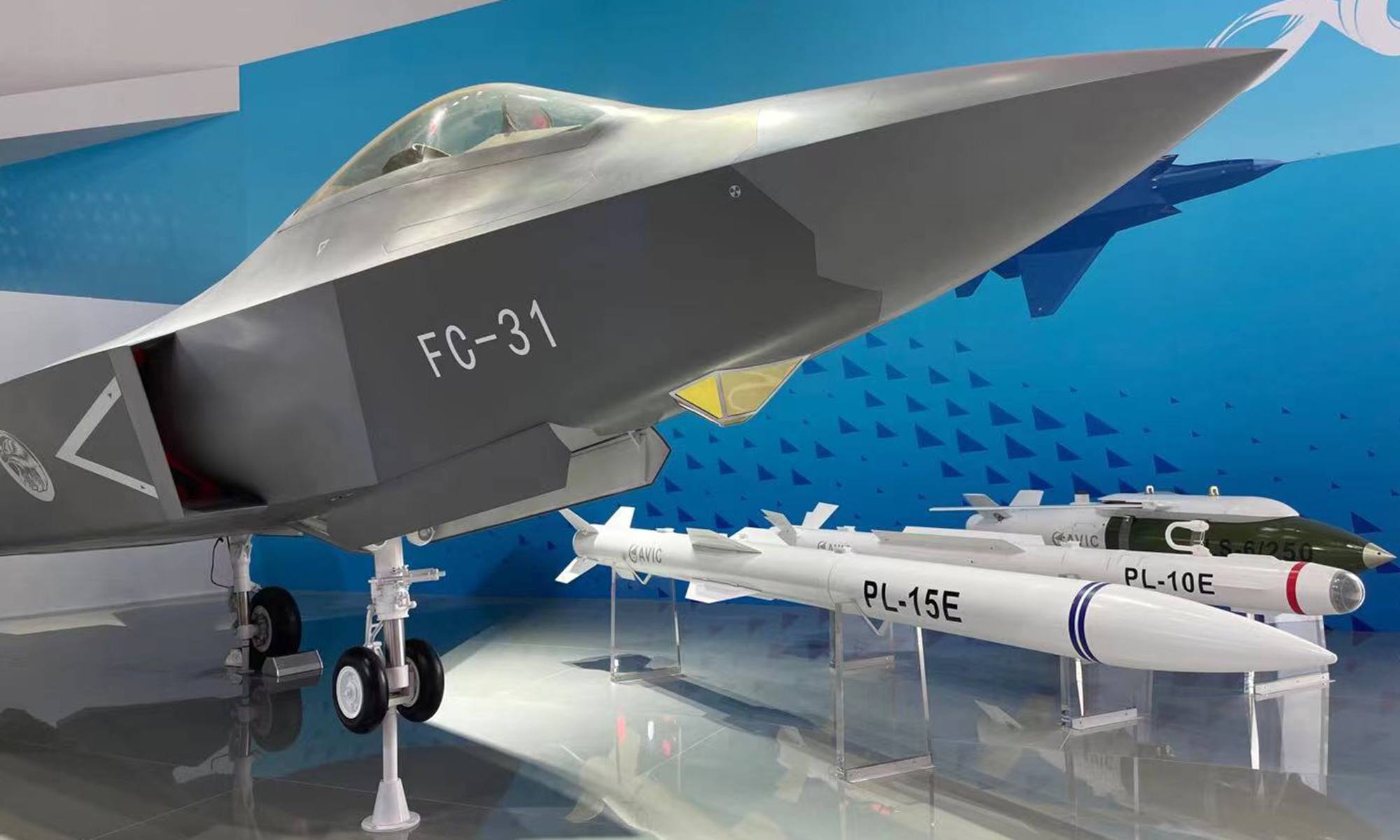 A model of China’s FC-31 stealth fighter jet is on display at the Airshow China 2021 in Zhuhai, South China’s Guangdong Province, on Tuesday. Photo: Liu Xuanzun/GT

After some of China’s most powerful air-to-air missiles feared by the US have joined the recent exercises by the Chinese People’s Liberation Army (PLA) around the island of Taiwan, the chief designers of those missiles said that China’s current generation of missiles are leading the world, and the next generation of missiles will enjoy absolute superiority over their foreign counterparts.

The exercises embodied the PLA’s firm will, full confidence and sufficient capability to safeguard national sovereignty and territorial integrity. As makers of China’s air-to-air missiles, the Aviation Industry Corporation of China (AVIC) Air-to-Air Missile Research Institute has the mission of developing world-class equipment to defend national pride and safeguard national security, said Ren Hongguang, a chief designer at the institute, at a recent press conference.

Parameters applied to measure a missile’s performance include range, speed, accuracy, damage capability and ease of use, said Fan Huitao, an academician at the Chinese Academy of Engineering, also a chief designer at the AVIC Air-to-Air Missile Research Institute.

China has seen great progress in all those five aspects, Fan said.

Some of the PLA’s top warplanes like the J-20 stealth fighter jet and the J-16 multirole fighter jet are equipped with the PL-15 and PL-10 missiles.

Commander of the US Pacific Air Forces General Kenneth Wilsbach said in an online discussion event in March that US F-35 stealth fighter jets had a close contact with China's J-20 stealth fighter jets over the East China Sea at the time, and the US forces are "impressed" by them, not only the J-20s alone, but also that China's KJ-500 early warning aircraft could guide very-long-range air-to-air missiles carried by the J-20s to hit targets very far away.

The PL-15E and the PL-10E are export-ready versions of the PL-15 and the PL-10. The PL-10E is a very agile and aggressive short-range combat missile, and the PL-15E is a beyond-visual-range missile guided with a combination of inertial, satellite navigation, data link and active radar capable of hitting targets 145 kilometers away, the Global Times learned.

In another provocative move, the Biden administration plans to formally ask Congress to approve an estimated $1.1 billion arms sale to Taiwan, including 100 AIM-9X air-to-air missiles for $85.6 million, US media reported on Monday.