It feels like yesterday that Northern Ireland's players were dancing around St Mary's with the Green and White Army as their Euro 2022 campaign came to an end in Southampton.

Yet, seven weeks on, Kenny Shiels' side are back in action for their final two World Cup qualifiers in Luxembourg and Latvia.

Rachel Furness, Simone Magill and Ashley Hutton are three big names who are missing, but while it's not quite a new dawn for Northern Ireland, with many of the experienced players in the squad set to carry on, Shiels has added some fresh blood to his group.

While the returning Kerry Beattie, Caragh Hamilton and Toni-Leigh Finnegan are known quantities now, let's take a look at the three new faces - Ellie Mason, Lilie Woods and Grace McKimm - who could make their senior international debuts over the next week as Northern Ireland play in Luxembourg on Friday before Tuesday's away contest against Latvia. 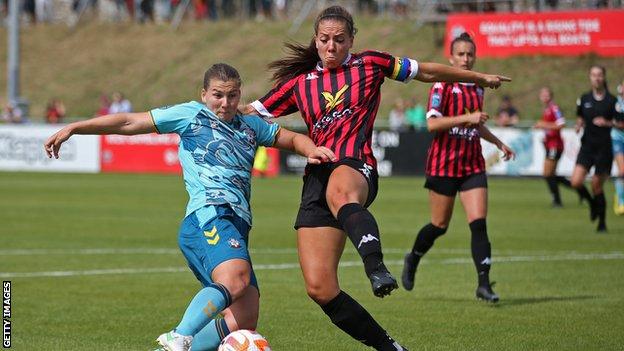 It's not often a player features for two different nations in the same year, but that is what is set to happen to Ellie Mason.

The versatile 26-year-old, who can play in both midfield and defence, made her international debut for Gibraltar in two friendlies in February but has now switched her allegiance to Northern Ireland, for whom she qualifies through her grandmother.

Mason brings a lot of experience despite being new to the NI set-up, and captained Lewes at the start of the Championship campaign.

She came through the ranks at Chelsea and has also played for Watford, Millwall, Yeovil Town and London City Lionesses.

"I've been watching Ellie for a year. She has been training with us but we want her to experience the next part of the growth of the team," said Shiels.

"She has a lot of credentials that fit our needs and hopefully she can filter into that.

"Ellie has done well at Lewes and played a part in where they are in the women's game - they are in a very good place." 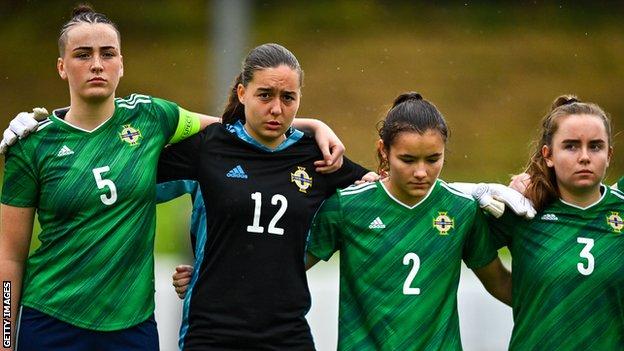 Goalkeeper Lilie Woods is the latest talent from the production line at Mid Ulster that has witnessed players such as Simone Magill and Jackie Burns head to the international stage.

Very highly rated by Mid Ulster, Woods has been one of the stand-out players in the club's promotion to the Women's Premiership, and playing consistently at the age of 19 has only aided her development.

Remarkably, she only became a goalkeeper four years ago by chance after starting her footballing journey as a striker.

The teenager was involved in Northern Ireland's full-time set-up before Euro 2022 and, although she missed out on the final squad, Shiels says Woods has "been doing really well" and deserved her call-up for the final two qualifiers.

"Lilie is a development player and there are lots of things that she has to learn," he added.

"There is no better place to learn them than on camp and World Cup fixtures are going to be great for her.

"She has come on so much. She is not ready to challenge for the number one position but, in the event of injuries and things, I wouldn't be afraid to throw her in." 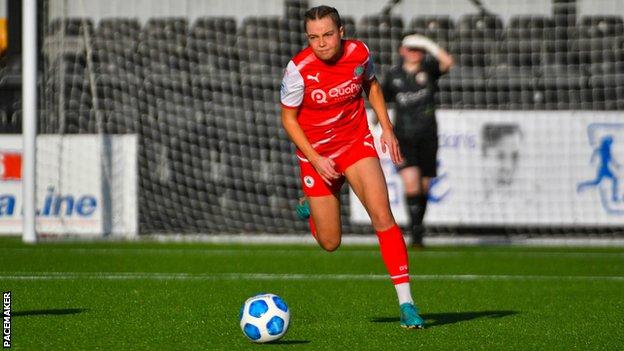 A late call-up following the withdrawal of Cliftonville team-mate Kelsie Burrows, Grace McKimm has more than earned her spot after playing a key role in the Reds' unbeaten start to the Women's Premiership season.

Naturally a left-sided player, the athletic 18-year-old hasn't looked out of place in a Cliftonville side littered with senior Northern Ireland internationals such as Marissa Callaghan, Kirsty McGuinness and Abbie Magee.

McKimm has experience with Northern Ireland at youth level and this call-up marks her first time in the senior panel.

"She is young, she's raw and a lot of stuff needs to be done," said Shiels after McKimm's first training session with the squad.

"I told her it is her turn to come in and impress. In the next trip it will be like another couple of young players to bring in, and that is the process.

"She found it tough today because it was quite a high tempo, but that is good for her. It's that experience.

"In the next camp, potentially, I'm not saying it won't be Grace as that would be unfair, but there is a good chance it will be someone else.

"I have rotated young players from when I came in and the likes of Louise McDaniel and players like that, they are now part of it and that would not have happened if we did not give them the opportunity to mix."

LotteryGames
Previous：Judge: Employers Don't Have To Cover HIV Meds If They Oppose 'Homosexual Behavior'
Next：Marcos bags $8.5 B in business deals during visit to Indonesia – Manila Bulletin