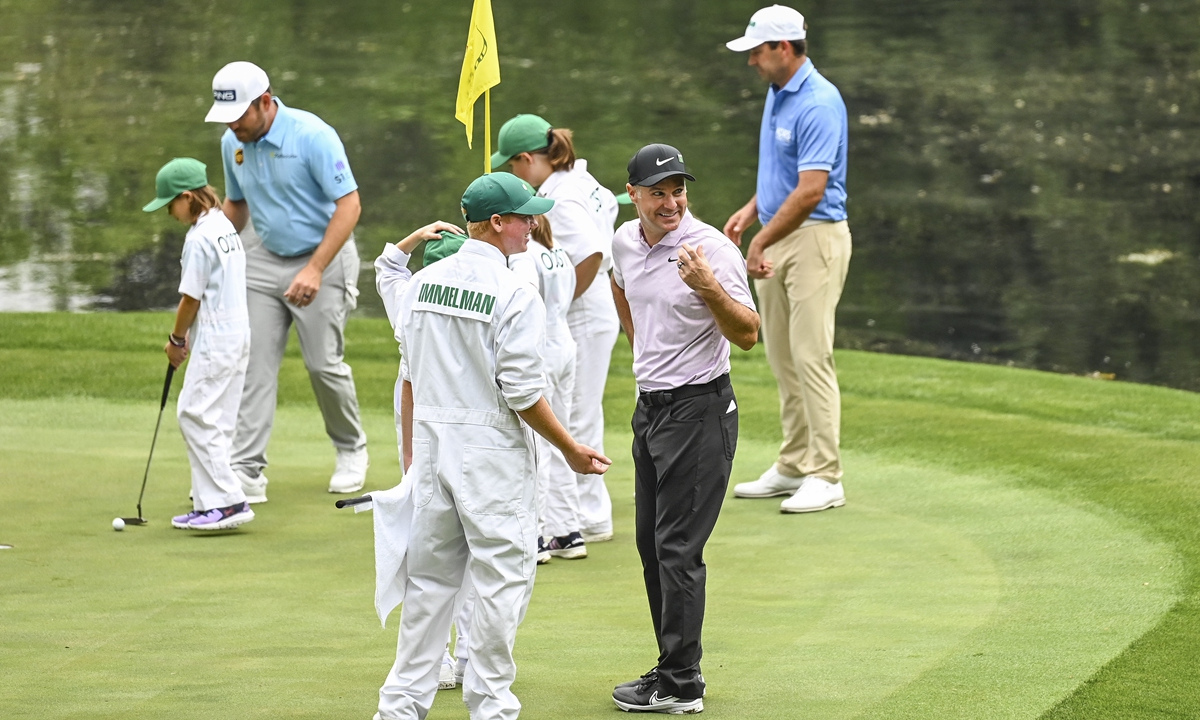 Trevor Immelman (center) of South Africa smiles during the Par Three Contest prior to the Masters at Augusta National Golf Club in Augusta, the US on April 6, 2022. Photo: AFP

Trevor Immelman finalized his International Presidents Cup team on Tuesday, with six captain's picks to complete a side "hungry" to take on the US even without high-profile names ruled out by their move to LIV Golf.

South Africa's Immelman, the 2008 Masters champion, admitted it was disappointing to see players including world number two Cameron Smith and 13th-ranked Joaquin Niemann ruled out after their jump to the Saudi-backed LIV Golf series, which saw them lose their PGA Tour status.

But he said he was more than satisfied with the squad assembled, which already featured former Masters champions Hideki Matsuyama and Adam Scott.

"These are the players that wanted to be on the team," Immelman said. "I want the guys that are committed."

Scott will play a 10th Presidents Cup and Matsuyama a fourth.

Five of the six captain's picks are newcomers to the match play showdown that features an International team of players from everywhere except Europe taking on the US in a competition modeled on the Ryder Cup.

South Korean Kim Si-woo was also selected by Immelman for a team that has a total of eight rookies.

"We understand exactly the mountain that we have in front of us: Possibly the best American team ever assembled if you look at them on paper with their accomplishments and what their world rankings are," Immelman said.

"This is everything you've ever dreamed of - is having an opportunity to play against the best on their home soil, and that's what we're going to have here in a couple weeks."

Immelman was granted two extra captain's picks after Smith and Niemann defected to LIV Golf - where both made their debuts at Boston last week.

Also among those out of the mix were South African Louis Oosthuizen, India's Anirban Lahiri and Mexico's Abraham Ancer and Carlos Ortiz.

"I'm not going to lie to you, absolutely it's disappointing," Immelman said of not having a player like Smith, who won his first major title at the British Open in July, at his disposal.

He said Smith and others had kept him informed of their plans as he tried to adjust to the quickly shifting landscape. He added that all of the rebels knew a move to LIV would rule them out of the Presidents Cup.

Immelman said his side will embrace its underdog role as the tournament, postponed from 2021 because of the coronavirus pandemic, returns.

In 13 previous editions the Internationals have won just once, in Australia in 1998. The two sides drew in South Africa in 2003.

Tiger Woods captained the US to a 16-14 victory at Royal Melbourne in 2019, the most recent of the Americans' 11 triumphs.