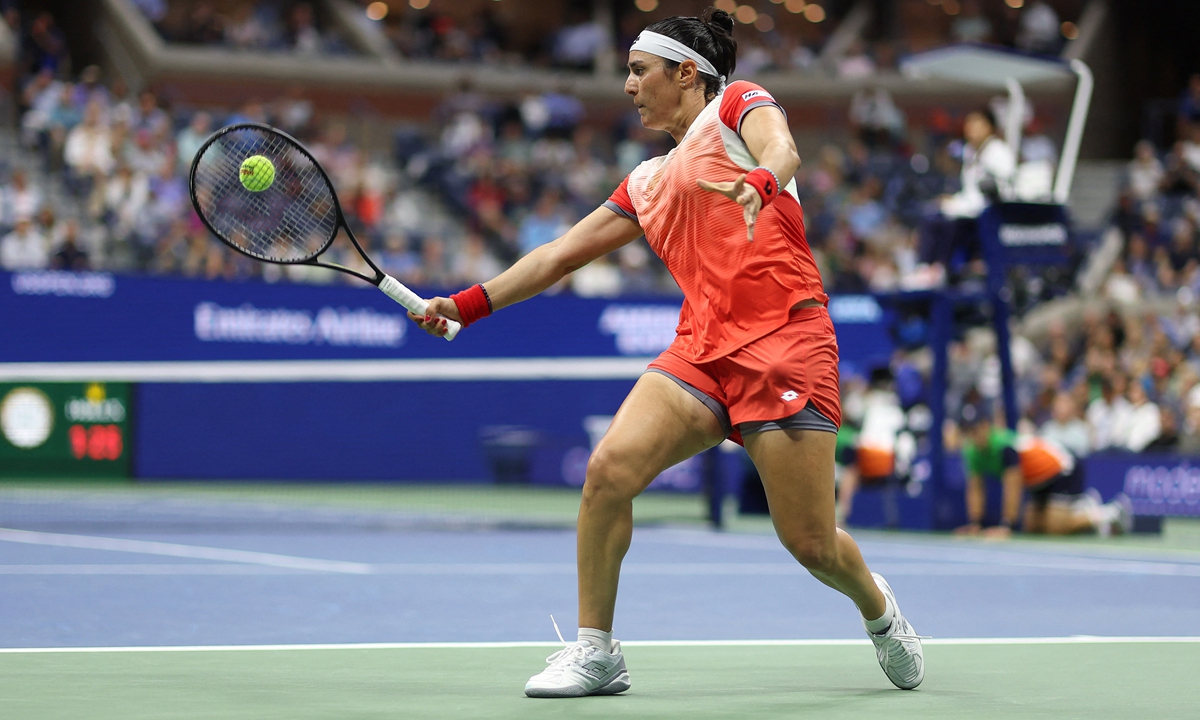 Ons Jabeur of Tunisia returns a shot against Ajla Tomljanovic of Australia during their women's singles quarterfinal match on Day Nine of the 2022 US Open at USTA Billie Jean King National Tennis Center in New York, the US on September 6, 2022. Photo: AFP

Tunisia's Ons Jabeur became the first African woman in history to reach the semi-finals of the US Open on Tuesday as France's Caroline Garcia ended the hopes of American teenager Coco Gauff to advance to the last four.

Jabeur, who also claimed a notable first in July as the first woman from Africa to reach the final at Wimbledon, scored a 6-4, 7-6 (7/4) win over Australia's Ajla Tomljanovic.

The 28-year-old will now face Garcia in the semi-finals after the in-form 17th seed dispatched the 18-year-old Gauff 6-3, 6-4 in Tuesday's other quarter-final.

Tomljanovic had landed in the quarter-finals after a run which included a third round victory over Serena Williams, in what was most likely the 23-time Grand Slam champion's final singles match before retirement.

But the Croatia-born Aussie's battling campaign came to a grinding halt against the dynamic fifth-seeded Jabeur, the Tunisian attacking from the outset and never letting up.

Jabeur said she had been infused with belief since reaching the Wimbledon final, where she was beaten in three sets by Kazakhstans's Elena Rybakina.

"I believe more in myself," Jabeur said. "After Wimbledon it was very positive. Even though I lost the final, I knew I had it in me to win a Grand Slam. And here I am in the semi-finals of the US Open."

Jabeur is known affectionately as the "Minister of Happiness" by fans in Tunisia for the joy that her progress on court has brought to her homeland.

However, Jabeur admitted she had let her frustration get the better of her on Tuesday, when she banged her racquet in frustration several times after coughing up multiple service breaks in the second set.

"I think I'm gonna be fired from my job as Minister of Happiness," she joked.

"It is tough to manage my frustration. I apologize for my behavior. I really wanted to keep calm but the racquet kept slipping away from my hand."

Tomljanovic admitted she had been outfoxed by an opponent she described as "crafty."

"When she's playing well, it's very hard to find where to go," Tomljanovic said. "Just really impressed with her game."

Jabeur will head into her semi-final against Garcia aiming to extend an unbeaten record against the Frenchwoman after wins at the 2019 US Open and 2020 Australian Open.

Garcia reached the first Grand Slam semi-final of her career after an ultimately emphatic win over American hope Gauff.

"My head is buzzing, I can't describe how I feel," Garcia said after a quarter-final she dominated almost from start to finish.

Garcia arrived in New York fresh from winning the Cincinnati Masters, and Tuesday's win was her 13th straight singles victory.

The 28-year-old said she was flourishing after regaining full fitness. She took a two-month break from tennis leading up to the French Open in June to recover from an ankle problem.

"I always played very aggressive and the last couple of months I feel healthy again and I've been able to move and practice the way I want," said Garcia.

"I just go for my shots even when I'm stressed or when I don't feel it. The way to improve for me is to move forward and I just try to follow that way."

Gauff meanwhile took satisfaction from her first US Open quarter-final appearance but admitted her campaign was tinged by disappointment.

"First quarter-final at the US Open, so there's a lot to be proud of. But definitely disappointed," she said.

"I think it makes me want to work even harder. I feel like I know what I have to do."