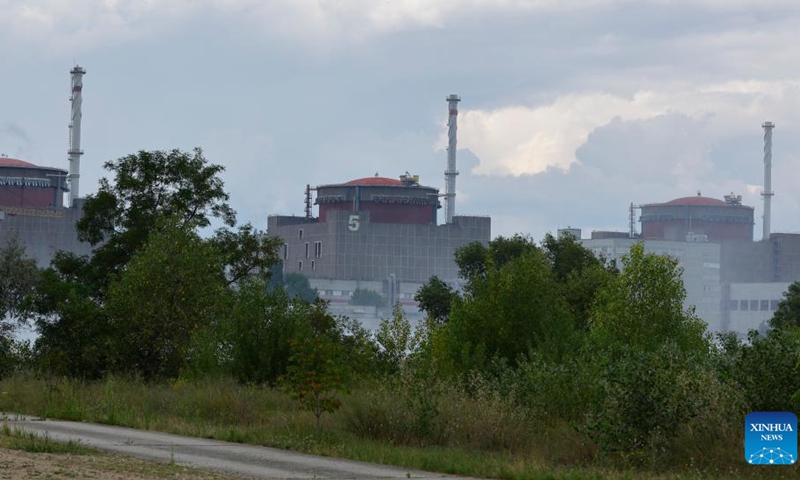 Photo taken on Aug. 4, 2022 shows the Zaporizhzhia nuclear power plant (NPP) in southern Ukraine. Zaporizhzhia is one of the largest atomic power complexes in Europe and generates a quarter of Ukraine's total electricity. It has been under the control of Russian forces since March and has been the scene of military strikes in recent days.(Photo: Xinhua)

The International Atomic Energy Agency (IAEA) on Tuesday called for establishing a "nuclear safety and security protection zone" around the Zaporizhzhia nuclear power plant in Ukraine, whose safety has raised international concerns amid recent shelling.

The IAEA is ready to start immediate consultations for establishing such a safety zone to "prevent a nuclear accident arising from physical damage caused by military means," the agency said in a report on Ukraine's nuclear safety, security and safeguards situation.

The report includes the findings of the agency's expert mission from their recent visit to the Zaporizhzhia plant.

"While the ongoing shelling has not yet triggered a nuclear emergency, it continues to represent a constant threat to nuclear safety and security with potential impact on critical safety functions that may lead to radiological consequences with great safety significance," the IAEA said in the report.

Zaporizhzhia, one of Europe's largest nuclear power plants, has been controlled by Russian forces since early March, while its Ukrainian staff has continued to operate it.

In recent weeks, the site of the plant has been attacked by shelling, with Ukraine and Russia accusing each other of the strikes.

Last week, IAEA Director General Rafael Grossi led a 14-member expert mission to the Zaporizhzhia plant. Two of those experts have remained at the facility on a permanent basis to ensure its safety.

The experts will "carry out detailed and continuous work to assess the physical damage to the plant's facilities, determine the functionality of the main and backup safety and security systems, and evaluate the staff's working conditions, in addition to performing safeguards activities," according to the IAEA's report.

The United Nations nuclear watchdog also said in the report that Ukraine's three other functional nuclear power plants have "continued operating safely and securely" since the start of the Russia-Ukraine conflict.