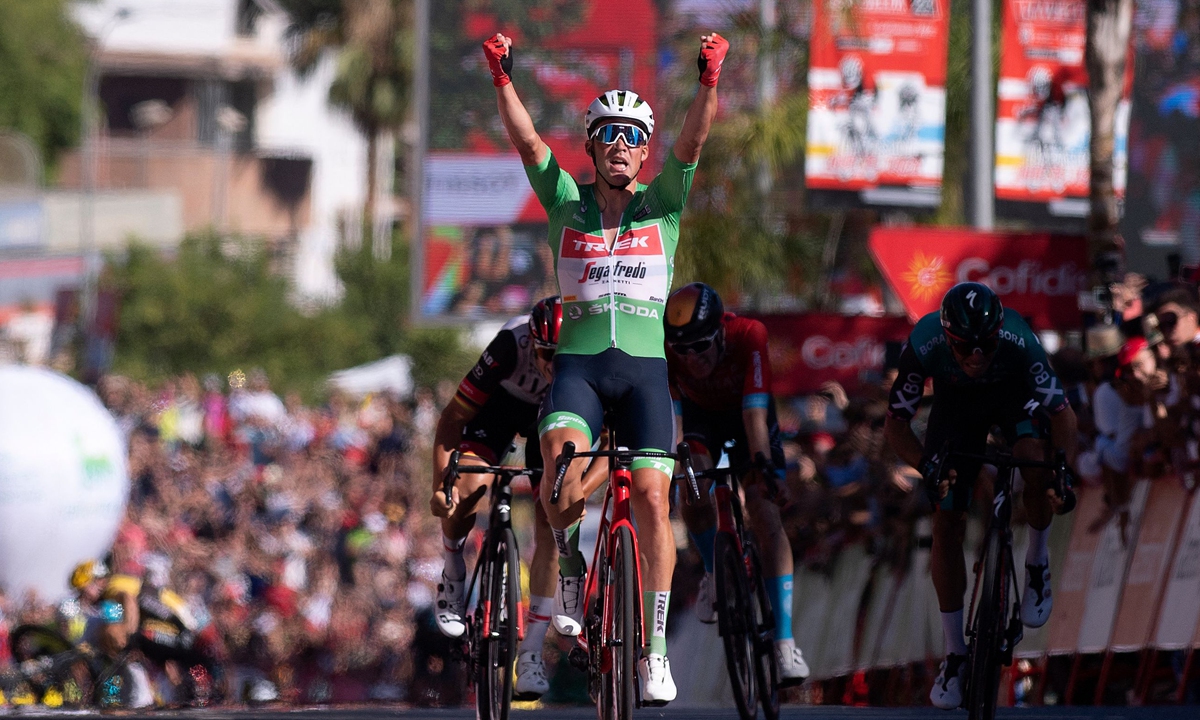 Mads Pedersen won a thrilling sprint at the end of stage 16 at the Vuelta a Espana as overall contender Primoz Roglic's hopes of dislodging leader Remco Evenepoel were hit by a heavy crash meters from the line on Tuesday.

Roglic, bidding for a fourth successive overall victory, began the day 1:34 behind Evenepoel in second place and launched a stunning attack near the end of the 189-kilometer ride.

The Slovenian poured on the power on a short climb leading towards the finish in Tomares to split the race and only four other riders managed to stay with him.

As the finish line loomed, Roglic was overtaken and seconds later went down heavily after seemingly touching handlebars with those of Fred Wright (Bahrain-Victorious) 100 meters from the line, leaving his participation in the rest of the race in doubt.

"All investigations for today have been carried out. Tomorrow morning, the team will decide in consultation with the medical doctor whether Primoz will continue his fight this Vuelta," Roglic's Jumbo Visma team said in a statement.

Denmark's 2019 world champion Pedersen (Trek-Segafredo) took the win from Pascal Ackermann (UAE Team Emirates) and Danny van Poppel (Bora-Hansgrohe) with a bloodied Roglic getting gingerly back to his bike and rolling slowly over the line in the pursuing bunch.

As Roglic attacked Evenepoel appeared to have suffered a puncture inside the final 3 kilometers and required a bike change.

Initial timings suggested Roglic had taken the red jersey with Evenepoel slipping down to third but that was soon revised with Evenepoel given the same time as the main peloton thanks to the "3km rule" which mitigates against crashes or mechanicals at the end of stages.

When the dust settled Roglic, who was given the same time as Pedersen, had taken back a mere 8 seconds on Belgian Evenepoel who now leads by 1:26 from Roglic.

Spain's Enric Mas is 2:01 down in third place with some mountainous terrain on the horizon later this week.

It was tough on Roglic who looked in real discomfort as he reached the finish. It was also a lucky break for Evenepoel who could have seen his hard-earned overall lead vanish.

But they were eventually reeled in as the pace quickened before the fireworks really began.

"We all know that Primoz is explosive so a final like this is really made for him. That makes it even more of a pity for him that he crashed. You never want somebody to crash - I hope he's okay."

"I'm happy that the 3 kilometers rule exists otherwise I would have lost a lot of time today."