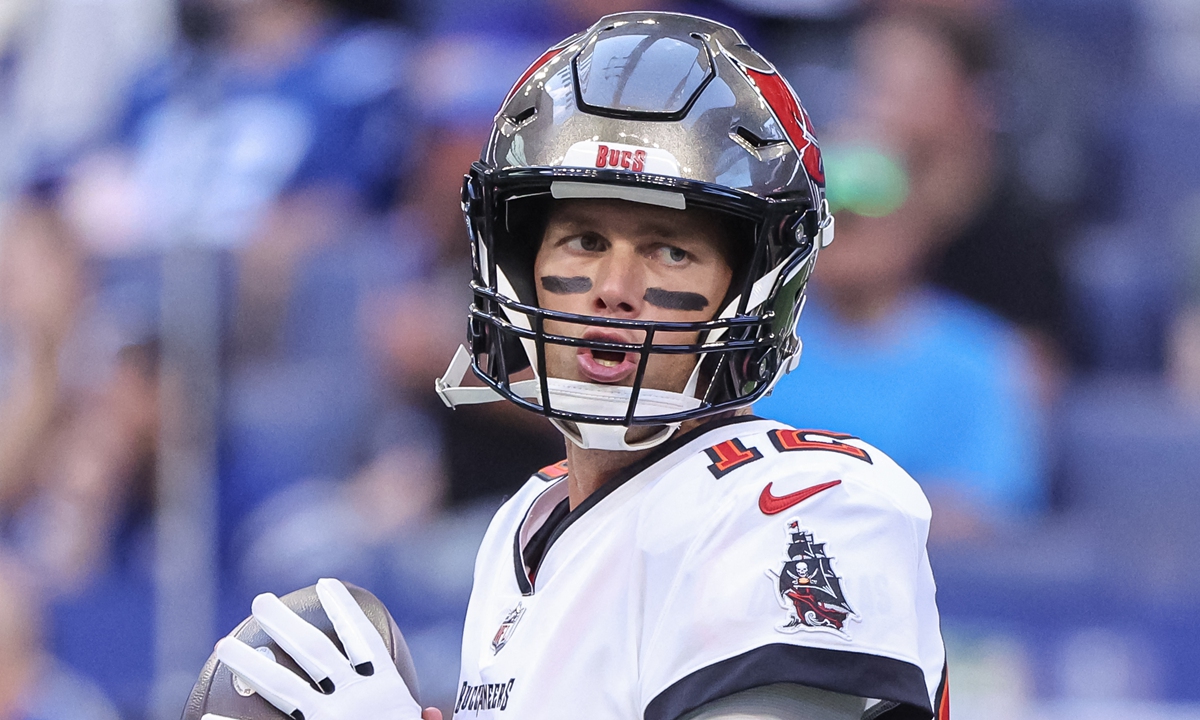 Tom Brady of Tampa Bay Buccaneers warms up before the game against the Indianapolis Colts at Lucas Oil Stadium in Indianapolis, the US on August 27, 2022. Photo: AFP

Tom Brady's dramatic retirement U-turn has the Tampa Bay Buccaneers in the spotlight as the NFL season kicks off with the superstar quarterback in search of an eighth Super Bowl title.

Needless to say he was welcomed back with open arms by Tampa Bay, where new coach Todd Bowles is at the helm and Bruce Arians, who coached Brady and the Bucs to a Super Bowl title two seasons ago, is now a consultant.

Arians's take is that Brady is "throwing better than I've ever seen him" heading into his 23rd NFL campaign, his body holding up thanks to an efficient throwing style and scrupulous attention to fitness.

Brady's excused absence from some pre-season activities for personal reasons raised eyebrows around the league.

But the 45-year-old insisted that despite the tug of off-field obligations "the competitive fire still burns.

"I've got a lot to prove this year," Brady said. "I'm out there to prove that I'm still capable of leading a team to a championship."

His teammates don't question that.

Brady's presence puts the Bucs firmly in the spotlight in a season that features the Rams' bid to become the first team in 18 years to repeat as Super Bowl champions.

Once again, however, the NFL finds itself touched by unsavory scandal with Cleveland Browns quarterback Deshaun Watson banned for the first 11 games after accusations of sexual assault and inappropriate conduct during massage sessions.

Watson, who missed the entire 2021 season amid the allegations while with the Houston Texans, didn't face criminal charges and landed a five-year, $230 million deal with the Browns.

He'll be eligible to return on November 28 - just in time for his first possible game to be a December 4 contest at Houston.

The Buffalo Bills, meanwhile, did what they could to sidestep controversy when they jettisoned rookie punter Matt Araiza two days after a civil lawsuit was filed alleging he was among a trio of San Diego State University players who raped a 17-year-old girl in 2021 - allegations Araiza denies.

The NFL is counting on the start of the season to turn attention to the field.

The Rams kick things off on Thursday against a Bills team widely touted as a Super Bowl contender.

Perhaps the biggest question mark for the Rams in their repeat bid is quarterback Matthew Stafford's balky throwing arm. Stafford, who played through pain last season, declared himself "ready to go" with no limitations as the tough season-opener loomed.

The Bills are hoping to launch their campaign with a statement win as they seek to end the franchise's 0-4 record of Super Bowl futility.

They fell to the Kansas City Chiefs in the AFC championship game two years ago and to the Chiefs in overtime in the second round of the playoffs last season - a defeat that quarterback Josh Allen says only solidified the Bills' resolve.

Allen said the arrival of new offensive coordinator Ken Dorsey means the Bills offense will be even better in 2022. And the club added a key defensive piece in two-time Super Bowl champion Von Miller to bolster their pass rush.

They're hoping the changes take them all the way to Super Bowl 57 in Phoenix, Arizona on February 12.

The season will also feature five international games, including Brady and the Bucs taking on the Seattle Seahawks in Munich on November 13 - the first regular-season fixture in Germany.

Mexico City will host a game, while three games in London include Aaron Rodgers and the Green Bay Packers taking on the New York Giants in October.

Rodgers nabbed a second straight NFL MVP award last season - the fourth of his career - but the Packers have bowed out early in the playoffs the past two years as the top seeds in the NFC.

After a couple of unsettled seasons - despite his MVP performances - Rodgers has signed a four-year, $200 million contract extension and is readying to lead a young Packers offense with a new outlook that's "less about what you don't have, what you couldn't accomplish, what could've been."

"Because that's a never-ending loop of stuff that takes you away from living with far more gratitude," Rodgers expressed in a statement.